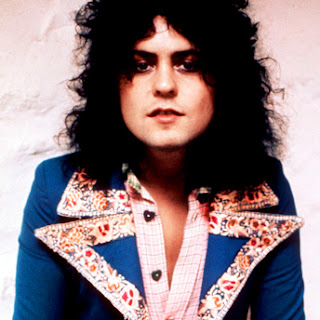 A few weeks ago, we watched the excellent Ringo Starr-produced video, Born to Boogie. This movie featured a restored concert from 1972, featuring T-Rex at their peak. Now of course, I have heard of T-Rex many times, mostly from the song, "Bang a Gong."  That was about the extent of my knowledge about the original glam rocker Marc Bolan, excpet I knew that he died in 1977 in a car accident.

What I did not realize was JUST HOW GOOD this band was!  Marc Bolan was a great performer.  His guitar work, most three chord rhythm, was excellent, with a fantastic growling tone coming from his 50s Les Paul.  I was even more amazed that he used solid state amps.  I would have thought that tone was from a Marshall.

We were both very impressed with not only Marcs musicianship, but with the rest of the band, as well.  What was interesting to me was that this music sounded like it could have been released today. I  heard bits of Green Day here.  I also noticed that Mark was very much in the same style as his good friend, David Bowie. The radio stations only play Bang a Gong so that was my exposure to T-Rex.  This DVD has the band playing many of their other hits that were popular in the UK.

Sadly, T-Rex only lasted a few  years, and Marc fell out of fashion. He was making comeback of sorts when he died in a car accident. He was very much excepted in the new punk rock scene taking place in London, as he influenced many of those young kids. 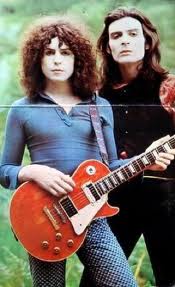 Gibson has now released a version of his famous orange Les Paul. This guitar was refiished after Marc bought it. The orange was meant to mimic a Gretsch guitar played by his idol, Eddie Cochran, who also died young in a car crash in England. The reissue guitar features a neck from a Les Paul Custom, as the original neck broke and was replaced. After watching the concert, I can see why it broke. Marc runs around and jumps around on stage that it was only a matter of time!

Marc also played a white pre-CBS Strat, a Zeimitas, and a Gibson Flying V.  All of his guitars were stolen hours after his death, with only the Flying V accounted for. 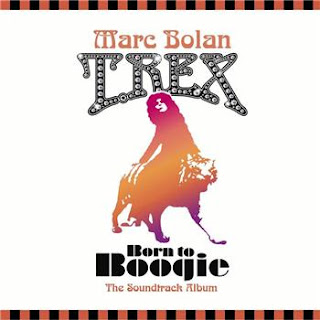 It amazes that here I am, 48 years old, still discovering great music recorded during the 1970s. There was so much great music done then. Who else can I "discover"?
Posted by Tom C at 5:14 PM